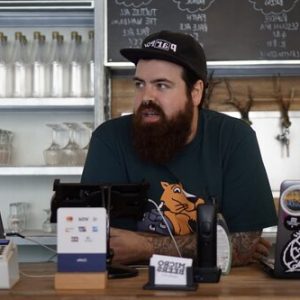 Being a beer novice is probably the best conversation starter at any party. We chatted with Sean on everything from sour beer to what is actually the perfect compliment for a burger. What started as a love for Guiness, turned into a full-fledged profession.

What is the story behind your beer passion?
I was living and working in Norway and I already had a fleeting interest in beer from my time living in Dublin. What originally started as an obsession with Guinness evolved in to trying more experimental beers in Norway and then eventually curating a beer list and brewing beers at the place I worked. It’s now 8 years later and I’m still working with beer!

Take us back. What was the first beer you ever tried?
Probably a sneaky can of Castle Lager from my Dad’s fridge and a teenager. I remember it tasting horrible, nothing has changed in that respect.

Best region in the world for beer (in your option)?
Obviously the USA is mecca as far as craft beer is concerned. I’ve got to say, there is nothing better than drinking a crisp, fruity Midwestern style IPA or pale ale on a hot Chicago day. Special mention must also go to the always brilliant Copenhagen and Brussels.

Where do you see the beer industry changing with covid -19?
It’s hard to say. Pubs have largely been decimated which has obviously had a knock on effect to the breweries who have lost the majority of their trade customers. The craft beer industry has managed to stay somewhat resilient by pivoting to focussing on small pack production and obviously people haven’t stopped drinking since the pandemic began so there has been a massive increase in demand for off-license sales and e-commerce. I think, and I’m hedging my bets a bit of this going forward, that e-commerce is going to accelerate massively after this. I can see a lot more of peoples money being spent online.

Any new upcoming beer types? What’s your take on sour beer?
I hope not, we have enough! I love sour beer. It’s such a varied category, from the complexity of lambic to the fruitiness and salinity of the modern gose’s. It’s a growing category too, I definitely sell a lot more sour beer now than I did when I first opened.

What type of beer pairs best with a burger (cheeky bias question)?
I know it’s going to sound boring (you probably want me to say a pale ale) but a good old fashioned German lager or pils such as Augustiner Helles or Rothaus Pils Pils does the trick.

When you aren’t picking out awesome beers and running your own shop what can you be found doing?
Hanging out with my fiance and our 4 dogs, grilling in the garden, listening to and expanding my record collection and watching any form of football, rugby or cricket that is on the TV. I’ve also recently bought an electric drumkit which I’m in the process of trying to learn to play.

Sean turned his passion into his profession – he owns and operates one of our favourite stores in Sheen, Micro Beers. Located at 335 Upper Richmond Road West. Micro Beers is now open for tasting – which he usually has a fabulous variety on draft which changes frequently.