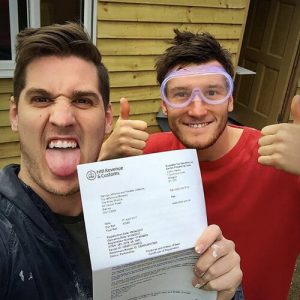 What do you get when you have two brothers who brew love beer and their local neighbourhood? An awesome craft brewery. That’s what. We love that we have a local family-owned brewery just down the road from us and we had to find out more about Freddie and George and what caused them to start Jeffersons three years ago….

Tell us about your passion for beer? (George) It all started with cask beer for me. Over 10 years ago there wasn’t actually that much choice on the keg lines at pubs, it was basically Lager that tasted like fizzy water or cask beer.

I soon began trying every cask beer I could get my hands on during my college years and the passion really snowballed from there. I become so fascinated with beer that I started to read books on beer history, science of brewing and the like and then soon took to brewing beer myself. The rest was history…

How did you start Jefferson’s? (Freddie) We were just brewing as a hobby at the time and we decided to brew a beer for our older brothers wedding back in 2015. We received a lot of compliments and even requests to do others events and that was the lightbulb moment in which we both decided to turn it from a hobby into a profession.

How has lockdown and this year affected your business? (George) We were actually travelling Vietnam when things took a turn for the worst with Covid-19. Just before we left for our holiday our new pressure tank had arrived and we had taken a loan out for it. We were also hosting a West London Craft beer Festival in April so it was looking pretty bleak! The flight back to uncertainty was a very stressful time and we already knew we would have to cancel our festival which was a massive shame. Luckily the local support we received during lockdown was huge and having a web shop up and running already really saved our bacon! We didn’t have any wholesale for months and so we can’t thank our web shop customers enough who supported us.

What is the first beer you ever had? (Freddie)The first beer i ever had would have been something rather unexciting like a pint of Carling but if we are talking craft beer then i have very fond memories of meantime’s Yakima Red Ale, a great beer.

What area of the world do you think makes the best beer and why? (George) I think thats too hard of a question to answer as there’s so many countries creating and producing excellent styles. I love the crisp but flavoursome Helles Lager style from Germany. It’s also hard to beat a pint of British cask beer on a Sunday, but as a brewery we tend to predominantly produce US style Pale ales and IPAs as we’re fiends for hoppy beers.

Who does your beer can art? (Freddie) We do all our can label and keg design in house. It helps a lot not only financially but time wise for us as we are a brewery who releases quite a lot of one offs and limited releases, the design side of things can really eat into your business. It’s also quite fun to be able to just knock up whatever we are feeling for that beer and have no restrictions on our designs.

What is your typical day like? (George) Being a two man operation, every day is different and we have to fulfill quite a few different tasks during any given day. If we are brewing we will usually start at 6am and finish at 6pm so we can fit in a triple brew. On non-brew days we will either be kegging and canning, delivering beer around SW London, designing the labels/keg clips, accounting among a few other jobs. We love that our days are varied and we have the opportunity to get stuck into all sides of a business.

What was the first craft beer you ever made? (Freddie) A blonde ale which then went out to become Thirsty Eagle after a few adaptations down the line.

Where do you like to get your hops from? Do you like to get them from various places or like one in particular? (Freddie) We have a number of different suppliers for our hops as there are hundreds of different hop varieties, spanning across the four corners of the earth, you can’t get them just under one roof – you need to shop around.

How is your beer connected to the local area? (George) We knew from the offset when we decided to start our own brewery we wanted to set up in Barnes. We believed SW London had some catching up to do with regards to craft beer as the East London brewing scene was booming! We also instantly knew we would have to officially launch at the iconic Barnes fair which was such a successful and memorable day. Barnes fair has now become an annual birthday celebration for us at Jeffersons and one of our biggest dates in our calendar. With regards to selling our beer locally, we love the fact there are so many local independent stockists like Pickle and Rye who are happy to stock our beers. It’s nice to see our beers being sold locally but it also has a positive effect on lowering our carbon footprint.

When you aren’t brewing beer you are…… (George) On our days off we love to completely unwind. Our week days are usually hectic with a lot of running around so when we do get a weekend off we are probably sinking a few beers with our mates or spending time with our better half’s.